A side by side comparison of Brother HC1850 and Singer 7258 . Cross comparison of features, performance and price. HC1850’s ability to do monogram might make all the difference.

Brother HC1850 and Singer 7258 are two good intermediate sewing machines. Currently there is a price difference of few dollars between the two, with Singer machine being the one with lower price. So in that regard, the 7258 holds a clear advantage over HC1850. But the price difference may change any time. One thing that is common between these two machines is the quality they offer to the users. The users of both machines rate them pretty high (with HC1850 being rated slightly higher than the Singer machine). So we need to have a closer look at both machines to decide which one offers more in value. 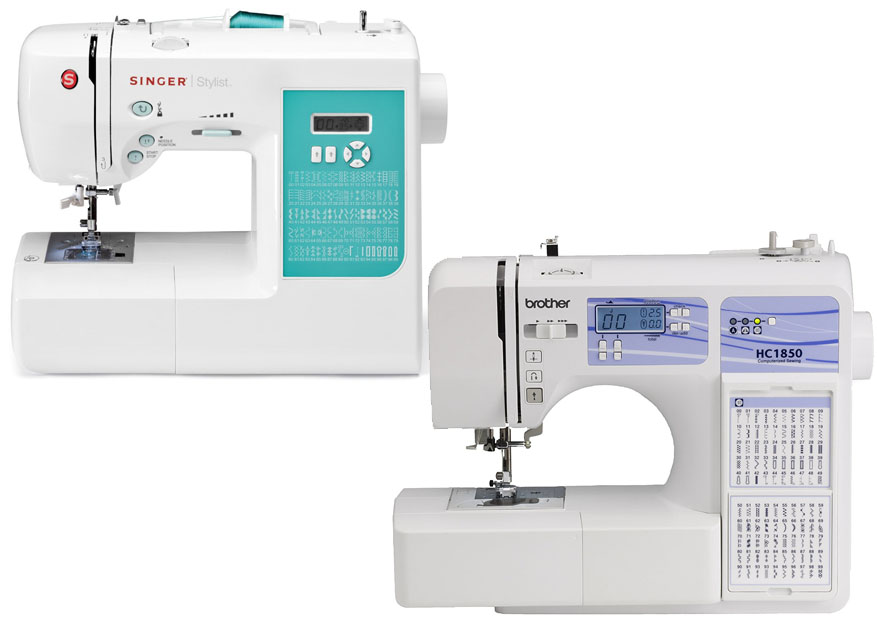 There are some significant differences in features between the two. The thing that made people to compare these two machines were the similar price and high rating. Now let us have a look at the major areas of differences

Singer 7258 on the other hand has just 100 built-in stitches including 9 essential stitches, 8 stretch stitches, 76 decorative stitches and 6 one-step buttonholes.

Monogramming : This feature is the one that makes or breaks the deal. You cannot do monogramming on Singer 7258 whereas Brother machine does come with a single font for monogramming. However you can’t adjust the font size or add decorative letters.

Except for the features discussed above, all other features are identical.

Performance wise, both machines are right up there with the best. Singer 7258 is a very popular sewing machine and its performance and quality is well known. That is the reason why it won Women’s Choice Award for the best home sewing machine in America. Whenever some one thinks of beginners sewing machine in the $200 range, 7258 would be the first one that will pop up in the mind. Its popularity can never be compared with Brother HC1850. But recently, this Brother machine is slowly making inroads into the sewing machine market. Quality wise, HC1850 is not that bad either. Both machines perform equally well on all almost all types of fabric.

The choice comes down to personal preferences. Feature wise Brother HC1850 is slightly ahead, but Singer 7258 makes up for that with a lower price tag. There is nothing to choose between them in terms of performance. So it all comes down to whether you need those extra features of Brother or the affordability of Singer 7258. One more thing you need to consider is that there is a better alternative for HC1850 from Brother itself. There is another Brother machine with much more advanced features and that too for lesser money. You can read about that machine from Brother HC1850 Full Review.