A honest comparison between Brother PE770 and SE400. There is a huge difference in price and features between these two wonderful machines.

PE770 and SE400 are two popular embroidery machines from Brother. There is huge price difference between these two models, the difference comes to couple of hundred dollars. SE400 is the inexpensive machine of the two. There is difference in functionality as well. PE770 is an embroidery only machine, SE400 on the other hand is a sewing and embroidery machine. Which means you can do regular sewing and embroidery on SE400. Versatility is the biggest selling point of SE400, whereas PE770 is famous for its professional quality stitches. There is one area where these two machines meet, it is the quality of stitches. If you ask anyone who uses PE770 or SE400, they will always talk about the quality. Since there is a huge price difference between both machines, it will be worth having a closer look at the features on offer and then you can decide which one offers more in value. 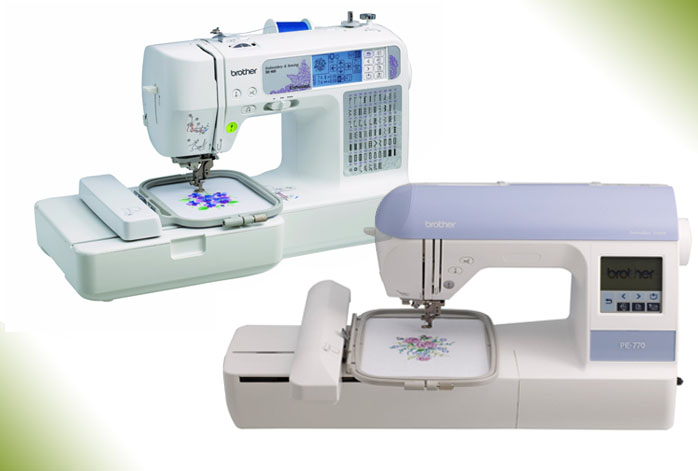 At first, we will be looking at the areas where these two machines differ. Later on we will have a look at the features as a whole.

Functionality : As I have said earlier, SE400 is a sewing and embroidery combo machine. PE770 is an embroidery only machine, so you will need a regular sewing machine to do stuffs other than embroidery.  As far as versatility is concerned, I think SE400 is slightly ahead.

Built-in Stitches : SE400 has 67 sewing stitches which includes 10 one-step buttonholes. It also has 70 embroidery designs and 5 lettering fonts. PE770 on the other hand comes with 136 built-in embroidery designs and 6 lettering fonts. Since these two machines have USB connectivity, you can easily import designs from iBroidery.com or other websites. So the difference between PE770 and SE400 in terms of built-in designs kind of evens out in that case.

Sewing Light : PE770 scores in this area with better lighting provided by 2 LEDs. SE400 has only 1 LED.

Embroidery Area : This is what makes all the difference. PE770 has a large 5″ x 7″ embroidery area. SE400 on the other hand has smaller 4″ x 4″ area. This is the most important factor you need to consider before deciding which one to buy. The larger embroidery area of PE770 has a huge advantage over SE400. It makes a huge difference while working on large projects. Less rehooping is required, thanks to the expansive embroidery area. Even though SE400 has a decent 4″ x 4″ embroidery area, I would recommend PE770 if you are a professional.

Storage Compartment : SE400 has a built-in accessory storage compartment which is absent on PE770.

Machine Weight : Being a more sophisticated embroidery only machine with large workspace, PE770 is bound to be much heavier than SE400. PE770 weighs 27 pounds whereas SE400 weighs just 13.669 pounds.

Now, let us have a look at all other features. The differences are marked out in red color for your convenience.

Both are high performance machines. As far as embroidery performance is concerned, you get the feel that PE770 is slightly ahead. It is a hardcore embroidery machine. It doesn’t mean that SE400 is inferior, it is still the best entry level embroidery machine available in U.S. That is the reason why SE400 is one among our “Machines You Can Buy With Your Eyes Shut” list. I personally love SE400 for a variety of reasons including versatility, ease of customization and quality.

If you look at the features of both machines, you will understand one thing. The areas where it makes a huge difference is the embroidery area and the price. The smaller embroidery area of SE400 would be enough for beginners and intermediate sewers to an extent. The 5″ x 7″ embroidery area of PE770 is vital for professionals. It may not sound much, but it does make a difference. Since there is couple of hundred dollars price difference between PE770 and SE400, I would recommend SE400 for a beginner and intermediate sewer. I really don’t feel that PE770 would be a necessity for a beginner as you can do most of the things on SE400 itself. If you are a hardcore professional who wants 100% professional results, go for PE770.