UKICRA CBT-0307 is not really ideal for those who are looking for a quality mini sewing machine. It does have its shortcomings. 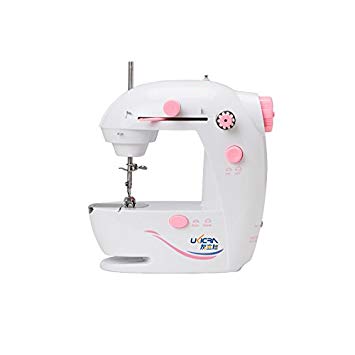 You might not have heard a lot about Ukicra. Even I haven’t heard about such a brand until I came across this little machine. Now there a lot of low cost sewing machines out there and UKICRA CBT-0307 is one among them. The quality of low cost sewing machines have always been under question. So you need to be really picky while choosing one.  UKICRA CBT-0307 will suit those who want to carry their machines around. It weighs just 1.5 pounds. It works on AC and 4AA batteries (not included). It has a single straight stitch. Even though the machine comes with a threader, you still have to put up with some eye strain. You can operate the machine in two ways, either using the button or by foot pedal. There are two speed modes, slow and fast.

The biggest issue with UKICRA CBT-0307 is the under powered motor. It does make a lot of noise while operating (sometimes it is very irritating). It is very unsettled at high speeds. It is very hard to control the machine at high speeds. The weak motor stalls often. It is not an easy machine to use.

Is It Worth Buying ?

Yes, UKICRA CBT-0307 is light on your pocket but it doesn’t add a lot of value as far as regular sewers are concerned.. Another alternative you can have a look is the Michley LSS-505. It is not an awesome machine, but it will get the work done for you in most cases. The price is pretty similar as well.