While looking at Brother CS770 alone, it looks like a very good sewing machine. But when the competitions come into the picture, it is a different story. 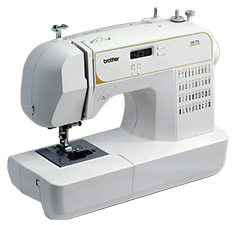 Brother CS770 has 40 built-in stitches including 5 one-step buttonholes. 77 stitch functions are available on the machine. LCD display is provided for viewing selected stitches and stitch settings. The maximum stitch width is 7mm and stitch length is 5mm. The display is pretty basic though, it is not backlit. The automatic needle threader threads the needle for you. Top drop-in bobbin makes bobbin changing effortless.

There is a manual thread cutter on the side of the machine which lets you cut the remaining thread without using a scissor. Free-motion quilting and free arm sewing is possible on Brother CS770. A work light is also provided. CS770’s motor is capable of delivering 850 stitches/min, which is on par with its competitors. The machine is pretty lightweight, it weighs just 11 pounds. It comes with a 25 year warranty cover as well.

Brother CS770 has nice variety of stitch options. The machine is very user friendly, there are no complicated buttons and controls. The stitch quality is very good. Overall build quality is also decent. Being lightweight, you can easily carry it to sewing classes.

As I have said earlier, Brother CS770 is just an electronic sewing machine. So it misses out on several important features that you get on modern computerized sewing machines.

Is It Worth Buying?

Brother CS6000i is an excellent computerized sewing machine with 60 built-in stitches. Its quality has kept it on top for several years, which is why it features in our list of ‘Machines You Can Buy With Your Eyes Shut’.