This is an interesting comparison as Brother HE1 and PE500 look very similar. The decision making depends only on one factor.

At the time of writing this post, there is a decent price gap between Brother HE1 and PE500. The current price gap is such that, you can easily fit in a Brother entry level sewing machine in that gap. This price gap makes the comparison between Brother HE1 and PE500 even more interesting. Currently Brother PE500 is the more expensive of the two, the scenario may change according to shopping seasons. All I want to know is, which one offers more quality and value for my hard earned money.

Brother HE1 Vs PE500 – Features Comparison

There must be some difference between these two machines, since they come with different model numbers. Both are embroidery only machines, which means you need a regular sewing machine for tasks other than embroidery. The first thing you will notice is the difference in graphics. It is just a cosmetic change. Brother HE1 comes with blue graphics whereas PE500 comes with pink. This color change will probably be the only difference you will notice. In fact, it is the only difference between these two machines. Everything else is identical. Then why did Brother name it differently? Probably one machine was an exclusive offer to a particular store. I am not 100% sure about this, but I have seen sewing machine manufacturers selling the same machines under different model numbers. This may also be a similar kind of thing.

Brother HE1 Vs PE500 – Performance Comparison

There is no point in comparing the performances as they are identical. However, one thing to point out is that, both machines have excellent stitch quality. You normally expect the quality as Brother HE1 and PE500 are the descendants of the ever popular Brother SE400, which is the best sewing and embroidery combo machine you can get in US.

The decision is easy, have a look at their prices and choose the less expensive one. That’s it. It is also worth noting that, PE500 has an upgraded version in the name Brother PE525. 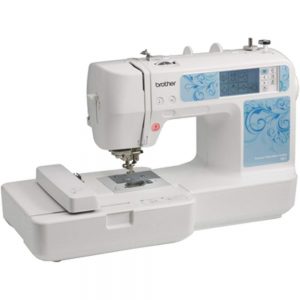