While domestic sewing machine manufacturers have been producing combination machines to allow one quality model that will accomplish any task the crafter takes on, the industrial sewing machine serves one function primarily. Though, both domestic and industrial machines are constantly benefiting in speed and accuracy from the advancements in technology.

You can still purchase used singer industrial machines, but the company has discontinued its industrial line to concentrate on household sewing machines.

In most cases, industrial machines have a single function. For instance, one machine might be a straight stitch while another would be zigzag or overlock.

In this way, machines maintain a high rate of speed, with motors that can allow certain models to reach 8,500 revolutions of the needle per minute, and still produce a durable stitch. 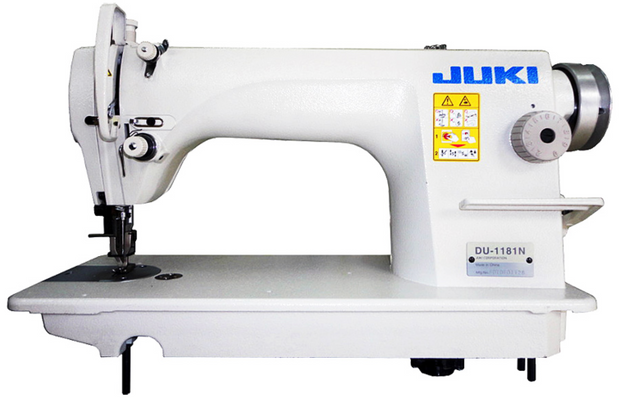 In production facilities, workers use one machine and once their part of the process is finished, they pass that item of clothing on to the next machine in the process.

For instance, one user would sew all of the seams in a pair of pants, and then pass that finished pair on to the worker that put in the zipper, or attached the button. In this assembly line method, work production is increased dramatically as each operator becomes automatic in their part of the process and needs not stop to switch machine function or take on another part of the preparation.

Today, many of the industrial machines are computerized allowing the machine to automatically perform functions that once took one or many workers to accomplish.

Why do I need a heavy duty model ?

Industrial sewing machines are also utilized in small businesses and homes. For example, a home seamstress or drycleaner might make excellent use of a chainstitch machine, a sewing machine ideal for hems that can also simulate hand stitching.

Other industrial machines include models that specialize in straight stitch, overlocker machines to finish edges, zigzag stitch sewing machines used in inner wear and decoratively, and buttonhole machines, along with many other models and lines.

Juki offers an automatic machine that performs the entire function of sewing on pockets automatically; a task that once took three or four operators to finish.

Various distributors work solely with supplying machines, recommending the best models for the performance required, and consulting on repair and part upkeep to keep machines running in optimal performance, such as L.Gent the official UK distributor of pfaff industrial sewing machines. As technology evolves, industrial machines are becoming increasingly computerized and automated, removing the need for as many physical workers while enhancing speed and productivity.