A honest comparison between the two biggest sewing machine manufacturers in US. You can pick the best, if you know what you are looking for.

Which is the better sewing machine brand, Brother or Singer? This is one question, I have been hearing ever since I started working with sewing machines. I will try to answer this question in the best possible manner. Singer is an American brand, it has been selling sewing machines for 164 years now (that’s some track record). There was a time when 9 out of 10 home sewing machines belonged to Singer. Now, things have changed, there are more competitors on the scene and all is not easy for Singer.

As far as home sewing machine segment is concerned, Brother is Singer’s biggest competitor. Brother started its sewing machine business 107 years ago. But at that time, Brother as a brand didn’t make too much of an impact as Singer machines dominated the scene. Things have changed now. Brother and Singer are now neck on neck in the US sewing machine industry.

Singer Vs Brother Sewing Machines – Which Is Better? 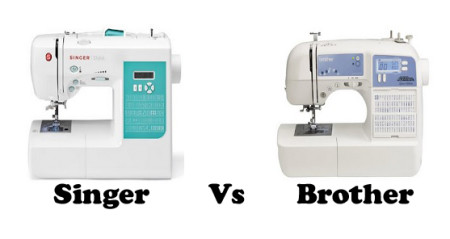 There is no one word answer for this question. You need a bit of explanation. I always give top priority to quality than anything else. Old Singer machines used to last a life time (at least 25 years life was almost guaranteed for a Singer machine at that time), which is not the case now. It is not just for Singer, all sewing machine manufacturers now make disposable machines that won’t go beyond 10 years. Almost all sewing machines now come with plastic parts, except for the interior metal frame. So you can’t expect the build quality of the 1950’s on a sewing machine sold today, be it Brother or Singer.

You can’t say that Brother is better than Singer. Both have their own merits and demerits. But one thing I noticed about Brother sewing machines is that they are a notch higher in ease of use and features. For the same price, Brother offers more features than Singer, especially in the entry level machines. Brother sewing machines tend to be lightweight as well, which can be good or bad (the good thing is that, you can easily carry them around. The bad thing is that they might not be as durable as a heavy duty sewing machine).

You need to know what you are looking for. First set your budget and look for the best sewing machine in that price segment, irrespective of the manufacturer. Don’t start your search by features, because doing that may not help you in finding the best quality sewing machine.

If you are looking for a sewing machine under $100 to learn and perfect the basics of sewing, go with a Brother machine. Under $100 there is no better brand than Brother. They have the quality and features. Singer doesn’t have a lot to say in this segment. Brother XM2701 and Brother XL2600I are the best sewing machines in this segment. For more information, you can have a look at our list of Best Sewing Machines Under $100.

Brother and Singer, don’t have a big impact on this segment. This price band is dominated by other sewing machine manufacturers like Janome, Bernina etc.

Brother doesn’t have any special heavy duty models under $200, whereas Singer has some quality heavy duty machines in the name of 4411, 4423 and 4432.

I hope this list has helped you make a decision. If you want to know more, you can always check our ‘Best Sellers’ tab. One thing I want to remind you is that, give top priority to quality. Don’t go for fancy features. A sewing machine with many features need not always be the one with best quality. Manufacturers might entice you by showing off many features, it will be only after you have bought the machine, you will realize that it doesn’t stitch well, which is the most basic thing that a sewing machine must do.